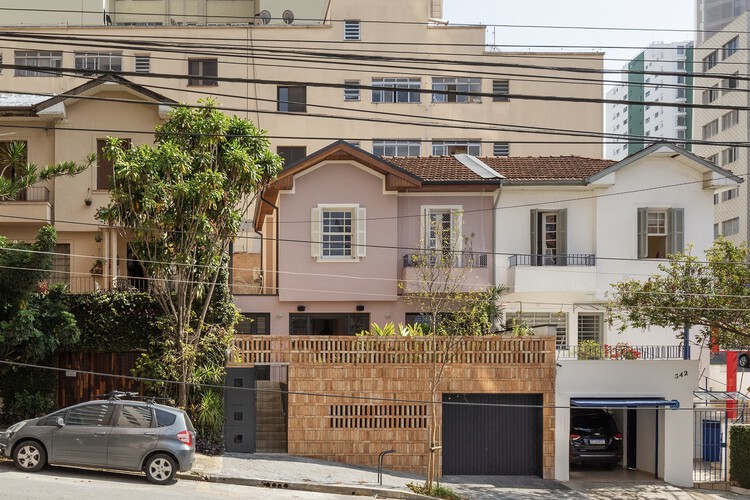 Text description provided by the architects. The house in Calle Apiacás is part of a group of row houses built in the 1950s. The intervention on the original construction proposes to rethink the relationship between the different spaces of the house, proposing new spatialities.

New openings integrate the living rooms, the kitchen and the patio, and provide better natural light. The “red patio” also functions as an extension of the kitchen, with a pleasant garden. Another important premise of the project was to establish visual relationships with the proposed garden areas. Vegetation is present in several areas.

The existing wooden elements have been restored and revealed (framework, stairs and parquet floors). The existing iron frames were recovered and repositioned on the front façade, favoring direct access between the front balcony and the patio. New wooden elements have been added such as the pergola at the entrance (providing better natural light inside) and the panel between the rooms, and the door/window frames in the kitchen/patio.

The new wooden frames receive different lenses (plain and armed), in order to filter the interior and exterior visual relationship in a distinct way. The path between the living room and the kitchen, with a rounded volume and the interior garden, configures the “in-between”, and offers continuity and a transition between the living room, the kitchen and the patio. The kitchen is also considering new granite counters and cabinets, keeping the home’s original ceramic flooring.

The state of the upper first floor of the house, on a high level, offers an interesting relationship between family life and the street. The front balcony receives an outdoor counter and a bench, both made of loco embedded in concrete.

The reconstruction of the facade with demolition bricks refers to the original construction technique of the house.