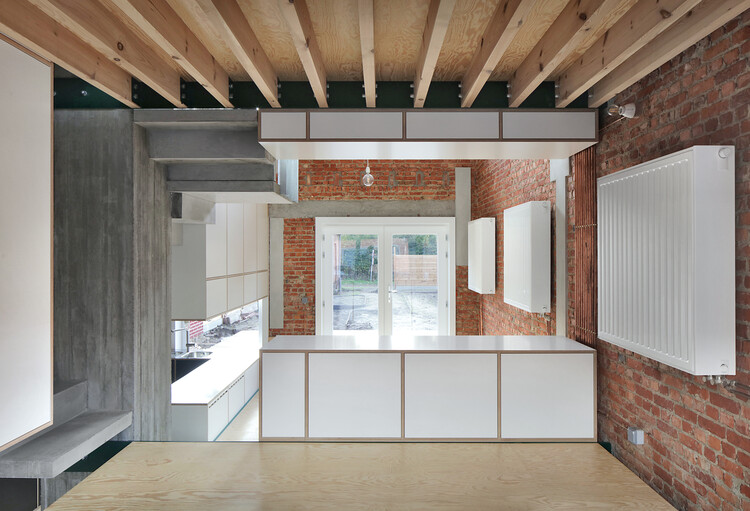 Text description provided by the architects. When Alison and Peter Smithson designed storage in the 1990s, they were working on an idea, which they first proposed in 1958 in an article titled “Future of Furniture”. Convinced that the overabundance of consumer goods would quickly become oppressive, they designed a house with elaborate backstage: “The heart of the project is a store for large items, accessible directly from the outside, available in every room without passing through another room. “They may have anticipated the rise of commodity culture, but they were mistaken about its nature. The overabundance did not represent a burden for the first generation which was able to accumulate a myriad of products. For them, it was the very image of freedom.

Architects have never been good at anticipating changes in the way we live. Excessive and therefore unforgettable architecture always results from an endgame. The buildings that are described as revolutionary are often the ultimate and the most revealing of a way of life on the verge of disappearing. When the Smithsons finally presented a plan for the house in which we were meant to brave the mercantile world, it was remarkably conventional, aiming for privacy, comfort and independence as any family home has done since the 19th century.

Something has changed, however, in the lives of the people Alison and Peter Smithson were talking to, a generation often referred to as baby boomers. Their children have left home and many are moving into smaller accommodations, taking with them everything that has accompanied them throughout their lives. For one of these couples, Eagles of Architecture built a home like no other.

At the start, there was a house, so conventional that it could have been a textbook case, intended to normalize family relations within the home, a configuration that the owners no longer needed. What followed can hardly be described as a renovation. The house was gutted until only the outer walls and roof remained, and a brave, cartoon-like new house was built inside. A single column spiral staircase that sits off center in a space no larger than 7.40 by 5.60 meters. This column is surrounded by a swirling world of cabinets.

The effect is reminiscent of the ever-increasing number of brooms circling around the poor sorcerer’s apprentice in Walt Disney’s 1940 film Mickey Mouse. After first enchanting the broom to help him fetch water, the apprentice is unable to prevent the broom from performing this action. task again and again. By splitting the broom with an axe, it is not eliminated but multiplied, and soon the workshop is flooded. Cabinets are not behind the scenes, like those in the storage room, they are center stage. They make up the house without organizing or dividing it.

All of the Mickey Mouse films are grounded in the motive of leaving home to learn what fear is, wrote Walter Benjamin in 1931. The Eagles of Architecture house built in Dendermonde leaves behind the social construction of a home as its inhabitants face fears and fearlessness. of a generation that braved the world of commodity culture.