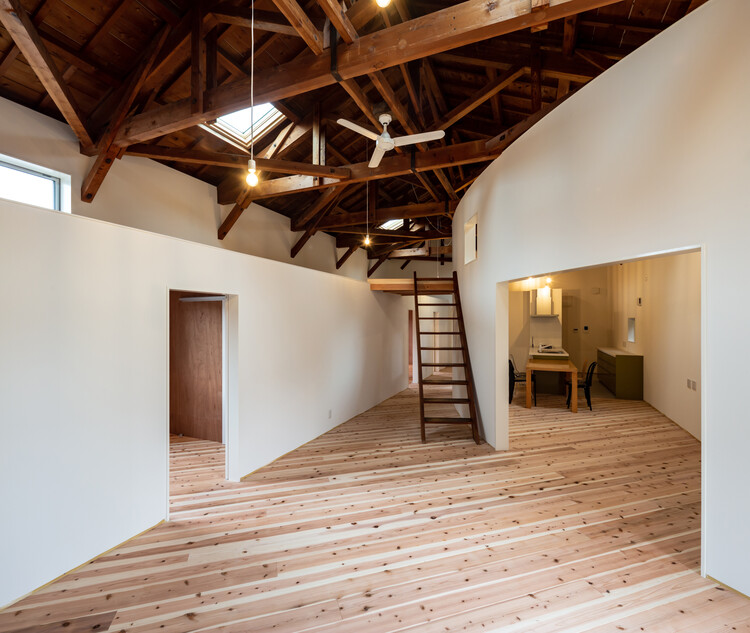 Text description provided by the architects. This is a renovation project in a city located in the northern part of Kyoto.

The existing building was originally a weaving factory, an industry that has existed for a long time in this town, but now it is not used for its original purpose but as a warehouse. When we received the request, the client wanted to demolish the building and build a new low-cost house for his family in its place.

When we visited the site and saw the building, it was overflowing with stuff, but it was spacious with high ceilings, and most importantly, the structural style of the ceiling was very beautiful. I immediately proposed the use of the existing building (renovation) to the client and was able to obtain his agreement.

We were going to change the building’s use from a factory to a warehouse and then to a house, but when we thought about converting the building to a house, we couldn’t make a big opening in the outside wall because there was a car nearby maintenance plant. Too bad we couldn’t create a large opening, but instead I imagined living in the building looking at the structure of the ceiling, which I thought was very beautiful when I first saw it time.

The building was originally a factory, so the ceilings were high, and looking at the beautiful structure of the ceilings, I felt like I was looking at a natural landscape like the mountains or the sky. While securing the necessary space (the minimum for a family of four), we came up with many ideas and proposed them to the client, including the discrete plan, the curved plan, the ring plan and the house shape. plan.

All of them appealed to us and we all wanted to achieve them, but in the end, we opted for the curved plan. Later, we presented all the models we used for the presentation to the customer’s family, and their two daughters used their dolls to simulate their lifestyle. The two girls used their dolls to simulate their way of life, and we were able to bring in the people who understood best.

The curved plane is a plane that incorporates a part of the circle that does not fit inside the large rectangular building, and it is a plane that considers the beauty of the line at the top of the wall when the beautiful structure of the ceiling is seen from ground level. The wall is curved and the direction of the floor is inclined with respect to the curved wall. The building is rectangular, but the plan is designed to create a sense of mysterious spatial expansion.